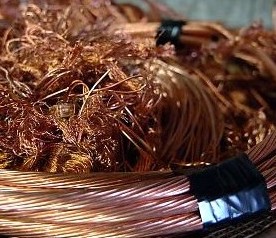 Colorado firm, Advantage Electronic Product Development, will demonstrate revolutionary new means of preventing copper theft at IP Conference in Oregon Sept 25-27, 2012. From the same company that launched the GroundHound Site Safety Warning System instrument at IP’s May conference in San Antonio comes a new revolutionary safety system for the prevention of copper theft in even the most remote locations. Utilizing the same technology as the nation’s Smart Grid, with its self-healing mesh network this system is inexpensive and easy to use.

The patent pending design leverages intellectual property developed by the firm. The first preview of the new smart system will be shown at the conference.

Advantage Electronic Product Development company president Jody Singleton, says, “Copper theft is a growing and very expensive scourge. That is why I’m so excited to announce this innovative solution designed for substations and transmission lines.”

SAN FRANCISCO — PG&E is working with police to combat a rise in copper thefts, a crime that’s a threat to public safety and has cost the utility millions of dollars.

There have already been 74 cases this year involving copper theft involving PG&E property. Last year, the crime was a big problem in Antioch, where thieves vandalized more than 300 utility poles to steal copper from transformers.

But this year the thefts targeting PG&E copper haven’t let up and are occurring everywhere in the utility’s region, from San Luis Obispo to Eureka, said Bob Puts, the utility’s manager of corporate security. From 2005 to 2011, PG&E has reported some 2,200 thefts and lost more than $5 million.

PG&E is working closely with law enforcement to prevent copper thefts at its facilities, including this yard in Vacaville.

PG&E isn’t alone. Copper theft is a problem that impacts railroads, construction sites, transit agencies and telecommunication companies like AT&T. Just this past weekend, copper irrigation piping was stolen along with aluminum benches from a San Francisco playground.

Typically, thieves steal the copper in utility yards or underground vaults and then sell the metal to recyclers. Puts said the thefts began to increase over the past several years as the price of copper has increased to as much as under $4 a pound. “A couple of years ago when the price dropped to $1 a pound, we had very few thefts,” Puts said.

PG&E Has Own Investigations Team

Thieves know to bypass aluminum, which sells for a third less than copper and is lighter.

PG&E has its own investigative team—seven employees who work throughout the territory plus five newly hired security specialists. One of their big objectives this year is improving security at PG&E yards. The utility also works closely with law enforcement, educates metal recyclers and supports sting operations against recyclers who knowingly receive stolen wire.

One of those sting operations occurred earlier this month in Contra Costa County, where seven scrap metal recycling yards revealed wires belonging to AT&T, cables from Amtrak and a metal ramp stolen from a freeway project.

State law requires that metal sellers be photographed and be able to identify the metal. Dealers can be prosecuted if they buy metal they know is used by a utility.

Unfortunately, sting operations are expensive because they involve establishing a phony recycling center, Puts said. A more common tactic is to get undercover officers to sell copper reels or transformers to recyclers and arrest or fine those who attempt to buy the metal.

Technology has provided some help for investigators.

PG&E has begun placing GPS devices in reels of copper wire in the utility’s yards. If someone tries to take the reel or move it, an investigator is immediately alerted.

“It’s usually in the middle of the night,” said Puts, who added that thefts tend to occur in the early morning hours.

Street cameras have also had some success. Earlier this year, a PG&E investigator identified a thief captured on camera near San Francisco’s Ghiradelli Square. The suspect had gone into PG&E manholes to steal ground copper wire. He was convicted of possession of stolen property, but with time served was given three years of probation.

Educating the public and especially recycling centers is one of the best ways to prevent the thefts, said San Francisco Police Sgt. Ed Hagan, who has worked closely with PG&E on issue. He pointed to an arrest of a suspect last week after a recycling center called 911 to report a man attempting to sell stolen copper. Port officials had warned the center several weeks ago to be on the lookout for stolen metals.

“That guy is in jail now,” Hagan told Currents. “I’m not sure the recycling center would have done that if they hadn’t been contacted ahead of time.”

One of PG&E’s big efforts is reminding the public of the dangers associated with copper thefts, which can cut electricity to hospital, 911 phone systems, traffic signals and railroad crossing signals.

Two years ago, thieves stole a copper from a transformer. The University of California, San Francisco Medical Center at Mount Zion had to run on backup generators for three days when the main power generator failed.

Hagan said the thieves tend to have a background in electrical work. But it’s still a dangerous way to make a living, as Puts has seen firsthand.

“People have been electrocuted and most of the people usually die,” he said. “If you’ve ever seen a person take a full charge, it’s not a pretty sight.”